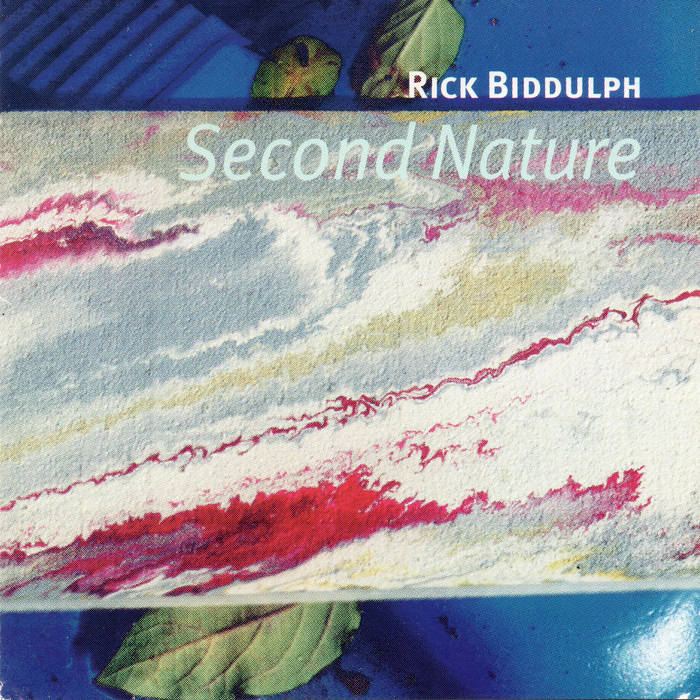 After over 20 years of involvement in music in a variety of guises, I am delighted to present my first solo CD, Second Nature.

Predominantly instrumental, with the inclusion of two songs, this album was written and recorded over a period spanning several bands and other pursuits, but owes its origins to work on music for three emotive environmental films. The cinematic and natural world connections continue through the album’s different moods in real or imaginary locations, through haunting sax - led pieces to wide screen epics. Initial recording took place in my home 8-track studio, including the performances of Pierre-Marie Bonafos (for a session fee of a pair of Doc Marten shoes unavailable in France) and this was expanded and polished in outside facilities with the invaluable contributions of the other musicians.

This involved transfer to 2” tape for the first batch to be worked on, subsequently for the remainder to the new ADAT format, digital multitrack on VHS tapes. The nascent sequencing and sampling technology in the wizard hands of Andy Reynolds was Cubase Notator.

How quickly the future becomes clunky and dated!

Sevenfold
A breezy opener, based on a bass and 12-string harmonics riff I wasn’t sure what to do with, until Pierre-Marie Bonafos wafted one take of tenor it and answered the question.

Frozen Lake
For some Russian footage - I dug out an unfinished song, dusted off the balalaika, and pictured sleigh rides out to snowbound dachas beside Julie Christie in a fur hat.

Lizard On a Rock
Written and roughly demoed following a Greek holiday, then in hibernation for a decade, now reawakened as my paean to Greece, its people, its history, its myths, and an illustrious bloodline via my great grandmother.

Underwater
A well known ship lies scuttled after a scurrilous bomb attack, to become the foundation of a new reef. An epitaph in 12-string harmonics.

Trade Winds
A nautical epic, grown from a titles theme for a new ship sailing the wide ocean. I spent my first two years afloat on a Thames Sailing Barge, so some latent memory may have leaked onto the tape. The influence of The Shadows should also be apparent.

Ice Bass
Solo bass harmonics. Cold, primeval. Or so I’d intended until it was used over silent footage of volcanoes erupting, the fire before the ice (of the next track) formed.

Where Footprints Fade
Written and recorded in two days for a film about Antarctica, and the need to tread lightly in the last wilderness. Beautiful soprano sax from Pierre-Marie.

Loose Ends
It was late, and my worn heels and a pint of Scotch were at ease in the nests they’d worn in my desk. I’d taken a hammering again, but I couldn’t shake free of the case. As usual it involved a frail with a taste for highballs and hoodlums, a sap with a big heart and an empty billfold, and the Flyer rolling her back East tearing a dream in the steam on the rails - a story as old as this city, as old as this track, a demo to put the hustle on the big shots at the T.V. station. No show, no dough. Maybe it still has a place here, until the next client sashays in through the office door in a cloud of fancy perfume and disapproval.

Rongelap Slide
For disturbing footage of a Pacific paradise ravaged by the ills imposed by the weapons testing of less pacific nations - all at a safe distance.

The Path To Pico Ruivo
A memory of a hike to Madeira’s highest peak from that of its neighbour. There was a rough path along dragon spines in the clouds, whose occasional parting, to reveal a few thousand feet of nothing either side, left you grateful for the return to mystery as they swirled back again. We turned a corner to find a section of the path with its skimpy railings had been swept away down the scree towards a daunting precipice by a winter collapse of the face above. A few footprints tamped across the debris showed that someone had been brave or foolhardy enough to try it; so, with a blackbird singing somewhere in the mist our only witness should we slip, we made the crossing. It was worth it to reach the sunshine on the peak, and to look out over the Atlantic. Then came the realisation that we had to return the same way…. The beauty and menace of wild places. (The rear photo was taken by Celia in a tunnel that led on from this place).

The Hillman Effect
West Coast jazz - the west coast of where escapes me for the moment.

Out Of Harm’s Way
From a solo bass idea, this had plans of its own, resulting in this closing epic. No story behind this, just a tension between pastoral and industrial elements, our first nature striving for balance with our inventive, industrious Second Nature.

“Second Nature overflows you with impressive atmospheric soundscapes, musical fantasies that evoke the most beautiful slides before your eyes'” – Background Magazine, Holland.

“The general mood is one of brooding intensity, producing evocative atmospheric music that is ideal for untethering one’s imagination to….. the awesome splendour of the natural world is vividly realised in these compositions. Listen and marvel." - Facelift, U.K.

“His music is fluid, graceful, and quite personal; very easy to get inside and enjoy….. melodic rather than ambient, filled with grace and inner beauty." - Music Uncovered, U.S.A.

“Without becoming monumental, these long pieces develop a musical depth and intensity fascinating in their variety, addictive in their harmony….. Every track is like cinema - a mental picture of sea, mountains, far landscapes, beauty." – Canterbury-Nachrichten, Germany

“It’s a release that grows with each listen; remarkable for its simplicity, yet stunning in its ability to convey emotion." – Exposé, U.S.A.

Although his involvement in the Canterbury scene has always remained marginal, Rick Biddulph is a well-known musician to fans of the genre due to his involvement in bands such as Caravan Of Dreams and Mirage, as well as other minor or shortlived associations with musicians such as Hugh Hopper, Dave Stewart and Richard Sinclair.
Rick Biddulph was born in Kent in 1950. His interest in music really started with the rise of British rock'n'roll bands in the early 60's. From age 15, Rick learned the guitar playing along to Shadows records, and moving to Canterbury for his studies (English and American literature) by the end of the decade he joined or formed several folk bands, dropping guitar in favour of bass in the meantime. He also went to see concerts : "I vividly remember hearing Richard Sinclair for the first time, and realizing the melodic potential of the bass that I was only beginning to guess at".
In 1971, Rick became associated with local folk group Spirogyra, consisting of fellow students from the University of Kent : Barbara Gaskin, Martin Cockerham, Steve Borrill and Julian Cusack. "I went along with them as roadie for a spate of European tours, my first taste of the road, and made my recording debut soon after, playing mandolin on one track of their second album". Eventually, Rick joined the final line-up, featuring Gaskin (vocals and piano), Cockerham (vocals and guitar) and John Gifford (woodwinds). At around the same time, he also collaborated with Steve Ashley (Albion Band, etc.) for a Dutch tour and several demo recordings.
Then, from 1974 to 1980, Rick Biddulph was the roadie and monitor mixer for Hatfield and the North, then National Health. This resulted in his playing on one track of National Health's second album, and various demo recordings with Dave Stewart ,which in turn resulted in the shortlived band Rapid Eye Movement. In 1976, Rick formed a band at Stewart's request to support on a Health tour, airing the songs of his flatmate at the time, Spirogyra's Steve Borrill : Crass Stupidity also featured John Gifford and guitarist Doug Chandler. During the second half of the seventies, Rick was involved in several low-key projects, including local gigs with Richard Sinclair and drummer Vince Clarke in Canterbury.
In the 80's, Rick Biddulph mainly played with bar bands (pick-up gigs, R&B, jump-jive, etc.). "A valuable experience", he recalls, "on-the-spot learning of bass rudiments I'd missed out on playing all the clever stuff!". He also worked extensively with Dave Stewart, first as part of Rapid Eye Movement (also featuring Jakko Jakszyk and Pip Pyle), then as guest on several Stewart-Gaskin recordings. Also during this period, Rick played a few one-off gigs with Hugh Hopper and did some demos with him.
In the late 80's, Biddulph started working on soundtracks for Greenpeace videos. These later provided the basis for his first solo album. On the live front, he also kept active playing bass and guitar with the French band Anaid, appearing on the "Four Years" CD. Saxophone player Pierre-Marie Bonafos was also in the line-up. "In a parallel universe to all that, I have been sustained by an alternative freelance career in specialised finishing work, progressing from kitchen and office stuff, to PA equipment (for Steve Borrill), to guitars (for Doug Chandler's shop) and, currently, on design models and prototypes (including work on the Synthaxe and Stepp guitar synthesizers)".
Between 1991 and 1994, Rick Biddulph worked closely with Richard Sinclair as the live bass player in Caravan Of Dreams, consisting of a trio with Andy Ward on drums, augmented whenever possible by David Sinclair (keyboards) and Jimmy Hastings (sax and flute), and others. Late in 1994, he was invited by Andy Ward to join Mirage, an all-star band featuring ex-Camel keyboard player Peter Bardens, for a tour which also involved former Caravan members.
In 1995, Rick Biddulph's first solo album "Second Nature", was released on Voiceprint. Initial recording took place in Rick's home studio, and this was expanded and polished in outside facilities with the invaluable contributions of other musicians. Predominantly instrumental, with the inclusion of two songs, the album was written and recorded over a period spanning several bands and other pursuits, but owes its origins to work on music for three emotive environmental films. The cinematic and natural world conncections continue through the album's different moods in real or imaginary locations, through haunting sax-led pieces to wide-screen epics.
-Aymeric Leroy / Calyx

If our First Nature lies in the wild and lonely places, somewhere along the way we recognized our Second Nature of art and invention.

The pieces on this album, some of which stem from work on music for emotive environmental films, owe much to this First Nature. I have a strong sense of location for them all.

All at Random - the most perverse freelunch funding deal imaginable

Hank and Leo - the twang that still thrills

And to everyone who has played on or contributed in some way to this album, especially Pierre-Marie Bonafos and Andy Reynolds for
their particular skills and involvement in making it all more than I had imagined.