Seven Men in Neckties: History of the Micros, Volume 1 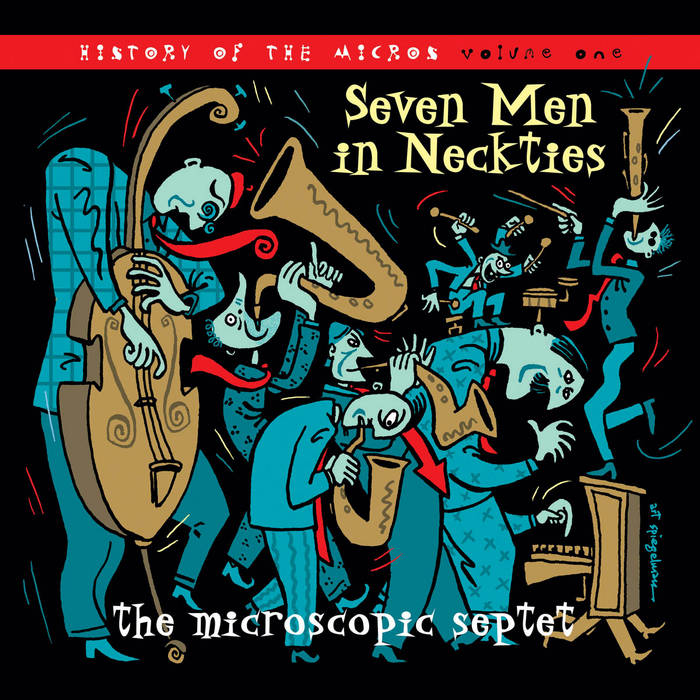 zedbit This group could perfectly catch soul of Manhattan in its different ways. “Seven men in neckties” is a best starter to take a look into magnificent world of Phillip Johnston’s long term collective.

Lord Dubious A nice slice of NYC underground jazz from an era that is not well documented. A curious combination of familiar and unfamiliar. I think the title "Take the Z Train" says it all. Interesting without being so interesting you don't get it. Favorite track: Wishful Thinking.

The Execrable Bede Thanks to the fine folks at Cuneiform, i not only get to groove along with the Micros, but all of the proceeds from the sale went to benefit the ACLU to help immigrants, refugees and other human beings in desperate need of aid. The collection, which contains the Micros' first 2 LPs along with rarities, is absolutely incredible, to boot... Favorite track: Let's Flip!.

Nick Bradey Superb set of material previously difficult to obtain . Great precision with intriguing
arrangements .
I recommend all releases from this septet .

Active for a dozen years, the Microscopic Septet were widely recognized as "New York's Most Famous Unknown Band."

The group started with a basic reeds-and-rhythm texture (soprano, alto, tenor and baritone sax, piano, bass and drums) that was sonically similar to the sound of the Swing Era. However, they employed these textures to address a widely eclectic range of styles, from free-form music to R&B, rhumbas and ragtime. The result was a brilliant blend of fresh-sounding orchestration and inspired soloing.

Beloved in New York, where they generally drew capacity crowds, "The Micros" were one of the most celebrated of the many cutting-edge units associated with experimental music's best-known venue, the Knitting Factory, during the peak years of the "Downtown" music movement in the mid 1980s onward.

This beautifully packaged and annotated set includes new cover artwork by Pulitzer-prize winning illustrator Art Spiegelman, new notes by leader Phillip Johnston, lots of great photographs and newly remastered versions of the first two albums by the band: "Take The Z Train" and "Let's Flip!", as well as quite a lot of never-before released material, including the well-known theme to the NPR show Fresh Air.

The majority of this set has never appeared on CD and all of it has been unavailable for a number of years.

"A truly distinctive sound that pumps Basie boogies, zestfully shifts from tangoed unison to Dixieland discordance with Mingus precision and sax solos that reach Eric Dolphy free and Earl Bostic blue within the same tune; this is one band that can afford to be seriously original and share a playful humor"
- Rolling Stone Jazz Record Guide

"Posterity is going to remember the Microscopic Septet as one of the best bands of the 1980s."
– The Philadelphia Inquirer

“...at once capriciously whimsical and deadly serious.”
– New York Sun

Tracks 1-4 and 6-8 are from Take the Z Train, originally released on Press Records in 1983.
Track 5 is an outtake from the Take the Z Train sessions.
Tracks 9–11 are unreleased tracks from the Let’s Flip! session.
Track 12 is the first of the versions of the theme from Fresh Air.

Notes:
Tracks 1–7 are from Let's Flip, released on Osmosis Records in 1985.
Tracks 8–12 are unreleased tracks from the Let’s Flip! session.

Fresh Air with Terry Gross is produced at WHYY in Philadelphia and
distributed by National Public Radio
Web site: www.freshair.npr.org

What you are holding in your hands comprises Part 1 of a four-CD retrospective of the music of The Microscopic Septet, covering roughly the years from 1980–1985. (Part 2, covering the years from 1986–1990, is entitled Surrealistic Swing (Cuneiform Rune 238/239)

It includes our first studio LP1, Take The Z Train, and our only live LP, Let’s Flip!, recorded at Mephisto in Rotterdam, as well as some tunes from that gig that didn’t make it onto the LP. It also contains the most oft-used version of Joel Forrester’s theme for Fresh Air with Terry Gross, which he refers to as the “Evil Twin.”

We came of age after the days when a jazz group would play a week or a month, or a season at a club, six nights a week. So what we did instead was find a bar that was quiet on a Monday night or a Sunday afternoon, get a friend to take money at the door, and play there once a week for as long as we could. Who can recall the forgotten venues where we once held down steady gigs: the Dive, the New Nile, the Blue Nile, Gerde’s Folk City2, Nightingale, the Paper Moon, the Taller Latinamericano, 1st on First? Yes, we played concerts, we went on tour, but in essence the Micros were a club band. In the 12 years we were together (we rehearsed once a week for long periods of that time), we were almost always playing somewhere, earning us the dubious sobriquet “New York’s Most Famous Unknown Band.” We played anywhere: a furniture store, a piano store, rock clubs like CBGB, Danceteria, the Peppermint Lounge, museums, libraries, street fairs. And gigs back then were three sets! We were about playing.

Later we went on to play at mainstream jazz venues (The Blue Note, Seventh Avenue South, the Village Gate) and festivals (three times at the JVC Jazz Festival & other festivals worldwide), but we always returned to these steady gigs at neighborhood bars.

Unfortunately we had legendarily bad luck with record deals, and, while we continued writing and rehearsing new music for the entire time we were together (especially the prolific Dr. Real, a/k/a Joel Forrester), we only recorded three LPs and one CD together over those 12 years. At the end of our tenure we had a working book of about 180 tunes, almost all originals, but only 34 were ever recorded and released. Well, this reissue makes a small dent in that, adding 11.

Take the Z Train was recorded live to two-track at Carl Seltzer’s Studio in Chinatown late in 1982. We went there because we heard Carl had Eubie Blake’s piano.

Let’s Flip! was recorded in the middle of a six-week tour in Europe. We had been taken on by George Coppens, a Dutch jazz entrepreneur with an obsession with sax quartets and obscure Tristano sidemen. It was the first time most of us had been to Europe and we were amazed: the respect for artists! the enthusiastic audiences!

The last entry here is the main version of Joel Forrester’s theme for the NPR program Fresh Air with Terry Gross. Terry had been one of our very earliest supporters, and when they decided to commission a new theme, they approached us. Joel Forrester penned the new Fresh Air theme in two forms, a Happy Twin (in a major key), and an Evil Twin (in minor), which were recorded in many forms, both trio and septet. The Evil Twin (or “hardboiled version” as they prefer to call it) eventually asserted itself as the regular theme for the show. We also recorded a number of small linking pieces, and Fresh Air has been incredibly generous over the years in giving us credit, and programming our music, both the Micros and our subsequent bands. The show has continued to grow and evolve as amazing radio, and we are honoured that they are still using the theme today: thank you Fresh Air! (see Surrealistic Swing for the Happy Twin, and the Gulf War variation).

You can find out more by going to: www.microscopicseptet.com