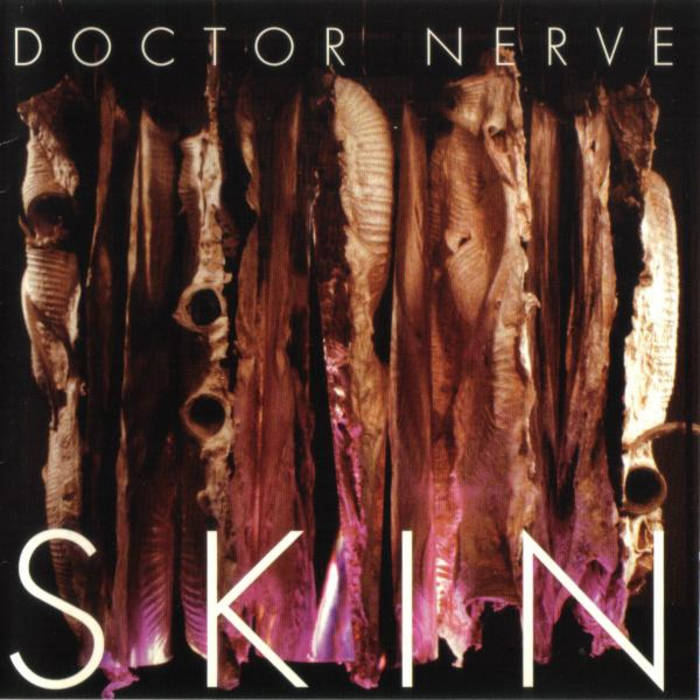 willy vlyminck Simply a must have, could have been easily made today but it was 1995.I had it back than on CD, today I happily did buy the Flac download, kudos to Cuneiform for making it the 5 Dollar release of the weekend.

"I'm not sure where Doctor Nerve is going sometimes, but they sure are in a hurry to get there."

Doctor Nerve is a rock band that has been annihilating the boundaries between rock, metal, improvisation, jazz, and experimental music since 1983.

Emerging out of the 'downtown / Knitting Factory' scene (although they pre-dated The Knit), they evolved from a great, sort of punky electric jazz hybrid ala Material, Curlew, etc.  fairly quickly into something completely original.

They were one of Cuneiform's earliest signings (our eighth release) and even now, certainly one of our most original!

On Skin, Nerve finds the unlikely meeting ground between heavy metal, thrashcore and artrock. The densest, heaviest, most intricately composed rock music you could ever imagine!

When originally released in 1995, this music genuinely sounded like nothing ever heard before!

"Doctor Nerve is the amazing instrumental rock octet from New York City fronted by guitarist / composer / visionary Nick Didkovsky. The lineup consists of your standard rock lineup of guitar, bass, and drums, augmented by two trumpets, sax, bass clarinet, and vibraphone. Their music is a tightly arranged and extremely complex rock with a strong foot in the jazz door, an ever-changing pastiche of odd angles, multiple-time signatures, twisted and fractured melodies and artful incongruities all delivered at an unbelievably high energy level and breakneck speed. They seem to be able to hold on to a groove well, though many of the rhythms are still nearly impossible to follow (try tapping your foot to this!)...
This latest album features more of composer / guitarist Nick Didkovsky's uncompromisingly dense and aggresive avant-garde rock. The music on Skin swings from a somewhat restrained RIO sound to heavy punk-influenced pieces driven by metalish guitar power chords. The jerky syncopated rhythms and barely tonal melodic meanderings remind one of RIO groups..., while the heavy guitar presence and some bizarre spoken interludes betray a more hardcore sound on several of the tracks. The intriguing juxtaposition of these two elements on many of the tracks of Skin, however, is one the things that makes this album work so well. Contrapuntal horn and vibraphone lines mingle with and play off of the powerful rhythmic riffing, giving the music a slightly schizophrenic and thoroughly unique feel. Didkovsky lets forth a few frenzied guitar solos, but for the most part Skin features incredibly tight ensemble playing, with excellent individual performances from the whole band. This is perhaps one of the strongest and most coherent Dr. Nerve releases to date; a fantastic album for the adventurous listener." – Exposé

Thanks to Julie Joslyn for Dead Silence screams.