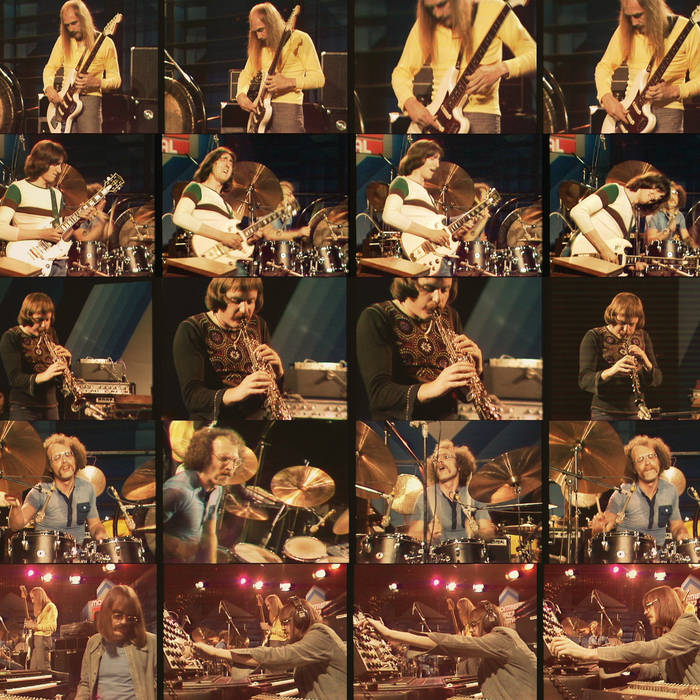 Soft Machine were one of the greatest UK avant/jazz-rock bands of all time and their work, whether their earliest performances as a psychedelic band, who were contemporaries of, and shared stages with Syd Barrett's Pink Floyd and the Jimi Hendrix Experience, all the way to being one of Europe's best known 'fusion' bands, continues to be name-checked by today's hip experimentalists.

By mid 1973, Soft Machine had gone through a tremendous amount of personnel turnover and a shifting in their sound over the previous year. The band now consisted of founding member Mike Ratledge (electric piano, synthesizer), Karls Jenkins (electric piano, piano, sax, oboe), Roy Babbington (electric bass) and John Marshall (drums and percussion). Having already collaborated with a guitarist, Gary Boyle (as documented on NDR Jazz Workshop), upon meeting guitarist Allan Holdsworth, then in the early stages of his professional career, in November, the group invited him to join the band, which he did, becoming the first guitarist to join the band in over 5 years!

With the addition of a musician of Holdsworth's prowess, Soft Machine decided to take a fresh start and develop material that would feature their virtuosic new addition in a fitting manner. Jenkins and Ratledge composed a whole new repertoire which was road-tested on extensive tours of North America and continental Europe in the first half of 1974 and which would ultimately make up the Bundles album, widely acknowledged as a jazz-fusion classic alongside the best exponents of the genre worldwide.

On July 4, 1974, Soft Machine were invited to perform at the prestigious Montreux Jazz Festival in Switzerland, sharing the spotlight with such headliners as Billy Cobham’s Spectrum, Larry Coryell’s Eleventh House and the Mahavishnu Orchestra. This alone was evidence of the band being a dominant presence on the now widely popular jazz-rock scene, which had evolved out of the unique and edgy sound that the band had pioneered a few years before. Switzerland 1974 is this performance, captured just a couple of weeks before the studio sessions for Bundles.

The hour-long set is the only available visual document of the Ratledge-Marshall-Jenkins-Babbington-Holdsworth line-up, and it includes live versions of the entire album, most notably the classic “Hazard Profile” suite, augmented with individual showcases for each member as well as a collective improvisation and brief snippets from Six and Seven. As well as retracing Soft Machine’s transformation into one of the leading exponents of jazz-fusion, it provides a rare chance to witness the genesis of Allan Holdsworth’s unique, innovative and unbelievably fluid and dexterous playing, before he went on to universal acclaim with Tony Williams’ New Lifetime, the prog-rock ‘supergroup’ U.K., Jean-Luc Ponty, Bill Bruford and ultimately his own electric fusion groups.

Caveat: Due to the age of these tapes and how they had been previously mixed, edited, used, and stored, there were multiple visual and audio sources of this show in varying lengths, each with their own flaws. While significant flaws could not be completely eliminated, very special thanks are due to our engineers Doug Moon and Udi Koomran, who worked from these multiple copies in order to make the final result as good as it can possibly be. This was deemed the best available option in light of this document’s archival/historical importance.

Due to the age of these tapes and how they had been previously mixed, edited, used, and stored, there were multiple visual and audio sources of this show in varying lengths, each with their own serious flaws and characteristics. The visual flaws are pretty straightforward, as we were forced to cut back and forth between better and worse versions to present the entire show. The audio issues defy logic, culminating in the severe problems on "The Man Who Waved At Trains" and "Peff." While significant flaws could not be completely eliminated, very special thanks are due to Doug Moon and Udi Koomran, who worked from these multiple copies in order to make the final result as good as it can possibly be.
Video restoration, post-production, and DVD authoring by Doug Moon at Inner Pixels Studio, Sacramento, CA (www.inner-pixels.com).