The Adventures of Zodd Zundgren 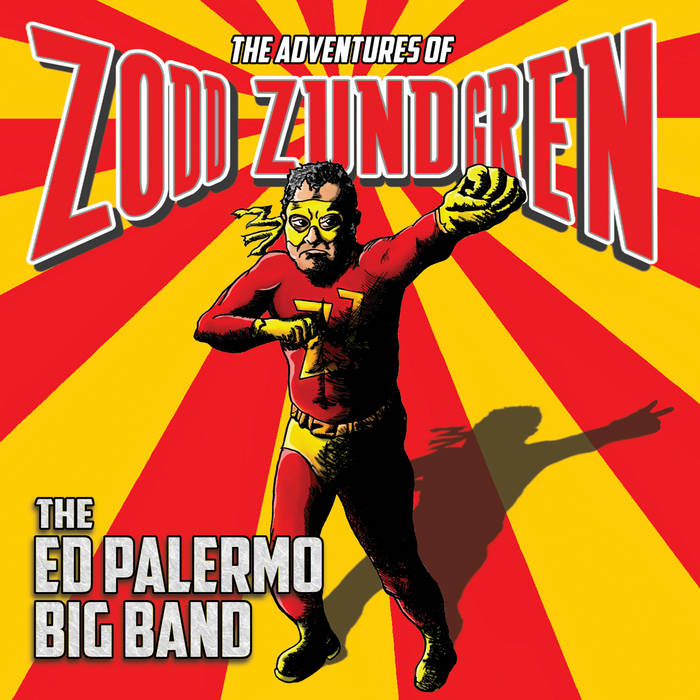 Terence J. Miles Terrific arrangements and execution with a buoyant lightness of feel. Ed and company sure make it look easy.

cathyleeb Love this Dynamic Duo of composers! Seeing EPBB live is a bucket list item for me!

Ed Palermo may have gained an international following with his ingenious orchestral arrangements of Frank Zappa tunes, but he’s hardly a one-trick pony. Earlier in the year the saxophonist released an uproarious double album The Great Un-American Songbook Volumes 1 & 2, a project celebrating an expansive roster of songs by successive waves of British invaders, from the Beatles, Rolling Stones and Jeff Beck to King Crimson, Traffic, and Jethro Tull.

With his new big band project, slated for release on Cuneiform on October 6, 2017, Palermo is back on his home turf, but the landscape feels strange and uncanny. He’s reclaiming the Zappa songbook, filtering Frank through the emotionally charged lens of the polymathic musical wizard Todd Rundgren in a wild and wooly transmogrification, The Adventures of Zodd Zundgren. Working with the same stellar cast of improvisers, Palermo somehow captures the essence of these iconoclastic masters, making Zappa Zappier and Todd more Rundgrenian.

He sees the Zappa and Rundgren as embodying a ying and yang approach to life that played an essential role in helping him navigate the minefields of teenage angst in the 1960s. “For most of my high school days my favorite musicians were Zappa and Todd Rundgren,” Palermo says. “Rundgren had his songs about self-pity, which were exactly what I needed back then. I’d go out with a girl and whatever party I brought her to she’d go and hang out with another dude. Todd understood. At the same time, Zappa had these snarky songs like ‘Broken Hearts are for Assholes.’ It was tough love. You gotta broken heart? Deal with it. Todd Rundgren’s music was there to give you a hug. I wanted to contrast the hard-bitten Zappa followed by a bleeding heart Rundgren ballad.”

Though the title suggests a forced merger, The Adventures of Zodd Zundgren doesn’t mashup the oeuvres of the two masters. Rather, the album mostly alternates between the composers, creating a deliciously dizzying whipsaw as the two diametrical stances sometimes blur or even switch. Zappa’s soaring fanfare “Peaches En Regalia” is more inspirational than smarmy, with a particularly eloquent alto sax solo by Cliff Lyons, while a brisk and forthright version of Rundgren’s “Influenza” showcases the muscular lyricism of violinist Katie Jacoby, one of the orchestra’s essential voices.

Palermo reaches deep into the Rundgren songbook for “Kiddie Boy,” a stinging blues from 1969’s Nazz Nazz, the seminal second release by his underappreciated band Nazz (an album which originally bore the Zappaesque title Fungo Bat). Drawing directly from the maestro’s original horn arrangement, Palermo displays some impressive guitar work on a vehicle for Bruce McDaniel’s blue-eye vocals. Napoleon Murphy Brock delivers a poker-faced rendition of Zappa’s surreal “Montana,” the tune that turned a generation on to the lucrative potential of floss farming, and McDaniel and Brock join forces on Rundgren’s deliriously silly “Emperor of the Highway,” an homage to Gilbert and Sullivan.

The contrasting sensibilities of the Zundgrens comes into sharp focus in the center of the album. While Palermo has recorded Zappa’s “Echidna’s Arf (Of You)” this time he replaces the horns with McDaniel’s intricately layered vocals via the miracle of multi-tracking. From Zappa’s playfully odd metered work out the big band saunters into Rundgren’s greatest ballad “Hello It's Me,” an arrangement for McDaniel’s most impassioned crooning based on the original version from 1968 album Nazz (not the hit from his solo Something/Anything? album).

Tenor saxophonist Bill Straub swaggers through Rundgren’s “Wailing Wall,” which is sandwiched between two slices of Zappa at his snarky best, “Big Swifty Coda” and “Florentine Pogen,” another superb feature for Brock. Palermo spotlights a dark and wondrous Zappa obscurity with “Janet's Big Dance Number,” a brief piece recovered from 200 Motels featuring Ben Kono’s noir tenor solo. From that unified hedgehogian arrangement Palermo unleashes the multifarious fox on Rundgren’s “Broke Down and Busted,” a portmanteau arrangement that touches on Rundgren’s “Boat on the Charles,” the Ramsey Lewis hit “The ‘In’ Crowd,” Zappa’s “Brown Shoes Don’t Make It,” and even traces of Steely Dan’s “Pretzel Logic.” It’s a tour de force that feels like stream of consciousness journey, though the id truly emerged on the closing hidden track. In what has become a Palermo tradition, he includes yet another version of an enduring lament about the difficulties of relationships, arranged this time in Nazzian style by McDaniel.

The seamless ease with which Palermo and his crack crew navigate between the Zappa and Rundgren shouldn’t come as a surprise. Over the years Zappa’s music has proven supremely pliable in Palermo’s capable hands, as evidenced further by a recent concert at Iridium that paired his songs with standards indelibly linked to Ol’ Blue Eyes (is there an album The Adventures of Zinatra in the future?). Everything he brings into the big band is a labor of love.

“Todd Rundgren holds a very special place in my heart,” Palermo says. “I realized I was in love with my girlfriend (now wife) listening to his album Something/Anything? It was about 2 years ago doing our regular hit at The Falcon that I decided to have Zodd Zundgren night. A lot of people who like the music of Zappa also like Rundgren and Steely Dan, but there are enough Steely Dan cover bands out there.”