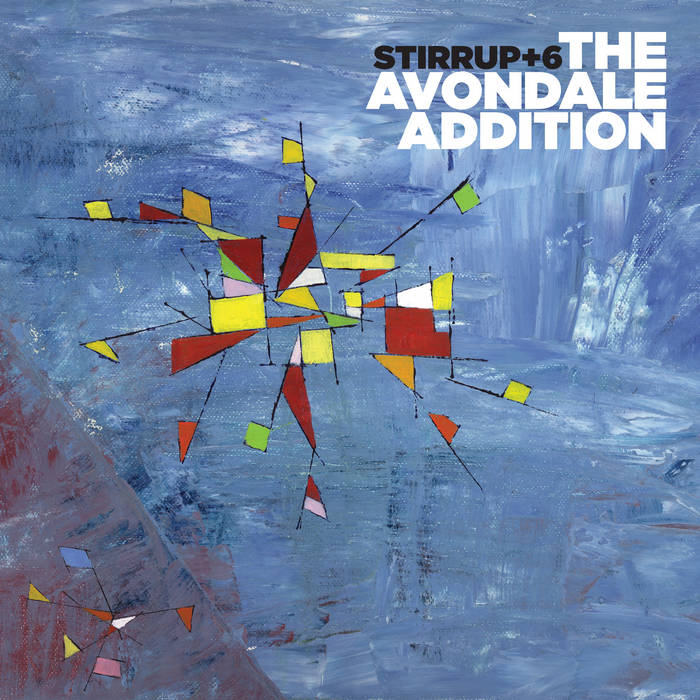 Stirrup is Fred Lonberg-Holm (cello, tenor guitar), Nick Macri (bass), and Charles Rumback (drums). Formed in Chicago in 2009 to explore their mutual interests in deep grooves, moody harmonies, and extended structures, the genre-defiant trio continue to do so to this day. A true collective, all three write and arrange for the band.

The Avondale Addition is an amalgam of two of Fred Lonberg-Holm’s long-running projects: Stirrup and his “Lightbox Orchestra”, a revolving-door project that began over 20 years ago as a way to organize large, ad-hoc improvising ensembles using a light-based cueing system and cue cards. Typically, a Lightbox concert has no pre-composed materials, but for this performance recorded live at Elastic Arts in Chicago, compositions by members of Stirrup comprised a “book” from which the guest musicians (the “+6”) draw on in addition to freely improvising when called on to do so.

In effect, Charles and Nick continue to do things they might normally do on a Stirrup gig, but instead of Fred playing cello, he acts as a kind of improvising arranger stationed behind his Lightbox cueing station, with the invited guests taking on the melodic and soloist roles he might normally perform.

"There is lyrical exposition, exciting juxtaposition, lots of power tempered by long flowing lines and strong solos from Paulson, Jackson, Williams and Johnson. Macri and Rumback anchor the jazzy in-and-out rhythms and the improvisations move effortlessly, sometimes collectively, sometimes hard and fast, at other times supple and enchanting, resulting in a strong contender for Best Album of 2020."
– Steve Loewy / The New York City Jazz Record

“…this just hits like an especially robust excursion into the beauty of avant-Chicago...with stretches that roll and even groove; in terms of rhythm (movement) and foundational sturdiness, The Avondale Addition is a substantial ride (that lasts for just over an hour). Everybody plays at a high level, and this [is] splendid stuff. ”
– Joseph Neff (The Vinyl District)

“The Avondale Addition” is my first interaction with Stirrup’s output, and the fourth in their catalog. The core trio of Charles Rumback, Nick Macri and Fred Lonberg-Holm is bolstered by a wonderfully balanced 6 piece ensemble of key players from the Chicago jazz scene. The most familiar all-stars to me are Keefe Jackson and Mars Williams, but man are there great moments from everybody! While there is very engaging solo work shown from all players, it is the way this ensemble is sequenced together and the sections align which is most compelling. Lonberg-Holm is one of my favorite cellists and a world class improviser (veteran collaborator with Brotzmann, Braxton, Vandermark et. al) but doesn’t play a note here, instead functioning as “lightbox operator”, using a tool for conducting/conduction developed elsewhere in his discography and on beautiful display here. Little to no context is given for the lightbox methodology or process, but it certainly explains the optical and kinetic ensemble arrangements on this disc. There are clear heads and written out sections that square up with a familiar vocabulary of experimental “big band” and harmolodic group writing, but the transitions between them feel controlled with a tasteful splash of precision and ease. One can imagine and almost hear visual cues fading in and out, like multiple projectors firing static loops set in motion upon the same surface and producing repetitive and evolving patterns. Bassist Nick Macri carries rock steady ostinatos throughout many of the pieces with a firm pizzicato (not to mention amazing harmonic and textural control of arco style elsewhere!), over which the Lonberg Lightbox drives dynamic solos and combinations from the ensemble, several of whom are switching instruments throughout. One is reminded of the Zorn game pieces, if they incorporated more repetition and slower groove oriented rhythm sections. Players are paired against and on top of each other, heads are brought back at just the right time to accentuate a soloist wailing, and the timbral blend from each of the melody players is chameleon-like. Violist Jen Clare Paulson stands out as a great ensemble glue-machine, able to occupy a full sound range inside of the horn section, and against the other strings. Clearly something new to be found with every listen here, and i expect we’ll be spinning it in the store for awhile!” - Frank Meadows, DMG

"The Avondale Addition by Chicago jazz trio Stirrup plus six other players (hence, Stirrup +6) starts off with ... flatulent lower register tones alongside creaky strings. It churns, it belches. Ever so slowly, horns and strings start to push the track towards something more concrete...and voila, we’re in a smoke-filled coffee house with the hottest act in town onstage. Improvised and recorded live, it’s impressive how well everything comes together and progresses, with its combinations of slithering woodwinds, cool as a cucumber bass, Lost Highway sax freakouts, and pleasant melodies." – Scene Point Blank