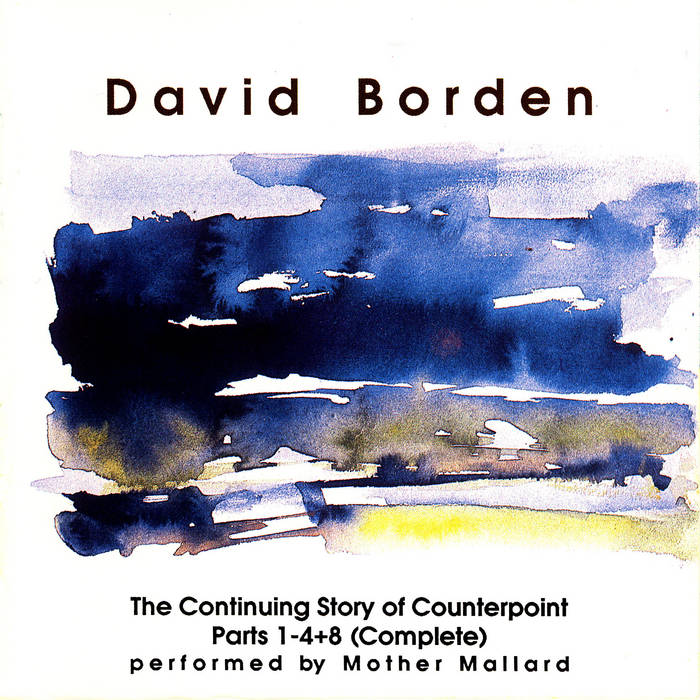 brit_b An excellent take on the counterpoint-"minimalist" style of the 70's -80's that Borden helped pioneer...sort of Tangerine Dream meets Steve Reich. The vocals are stunning. Favorite track: Part 1 (composed 1978).

Carsten Pieper Minimal counterpuntal music, rather in a rock than a classical context!
As David Borden has been on the radar for a while, I couldn't let pass this weekend's Cuneiform Records'special deal :-)

John Cratchley I've been listening to all three volumes of this transformational work a lot recently and I think,in time to come,this may be seen as one of the cornerstones of 'minimalist' Composition (i'm not really comfortable with that catch-all definition but it will suffice to elevate this work into the same echelon as Glass,Reich and Riley).

The Continuing Story Of Counterpoint is a remarkable 12 part musical cycle that Borden composed between 1976-87. Lasting 3 hours, Cuneiform has released this seminal work on 3 albums, each containing 4 parts. The music is a pleasing and highly listenable mixture of classical forms, dense textures, strict counterpoint, and high energy electronics.

"When released in its entirety, this series may stand as the 'Goldberg Variations' of minimalism, a canon of work that defines a style and an era." – Audio

"David Borden's The Continuing Story of Counterpoint 12 part series (and some additional subparts) occupies three full CDs. Borden spent 11 years completing this project in which he set out to, in his words, "develop my own contrapuntal language," after getting a solid academic grounding in the work of early contrapuntal composers, and the literature of counterpoint.
The earliest parts of Borden's Counterpoint project were put to paper in 1976, but Borden was experimenting with contrapuntal, minimalist language even earlier, with a pioneering, all-Moog version of the Mother Mallard ensemble, around 1970. The driving, pounding pulse of "Part 1," with the clear soprano voice of Ellen Hargis scatting over the top, has a "kosmiche" sound that would have fit right into one of German synthesizer group Tangerine Dream's better recordings. "Part 3" is really a continuation of "Part 1," with added vocal text. "Part 2 is slower and less insistent, with more intricate, interlocking rhythmic patterns. It was originally composed for two pianos, but the synthesized Mother Mallard ensemble gives it a much richer treatment. The 12 parts of his counter point series were not composed sequentially, and some parts are more involved than others. "Part 4," written seven years after Parts 1 and 3, borrows melodic materials from "Part 1," with warmer results. The dominant melodic theme is hauntingly beautiful, and somewhat reminiscent of Michael Oldfield's Tubular Bells. "Part 8" (really a different recording of "Part 8A," which appears on the next volume) features a somewhat abrasive, lower-register electric guitar which is a nice foil for the mellow electric keyboard patterns and the purity of Hargis' wordless vocals. The piece demonstrates Borden's willingness to try out new sonorities and textures within the parameters of his musical system." – Bill Tilland / All Music Guide