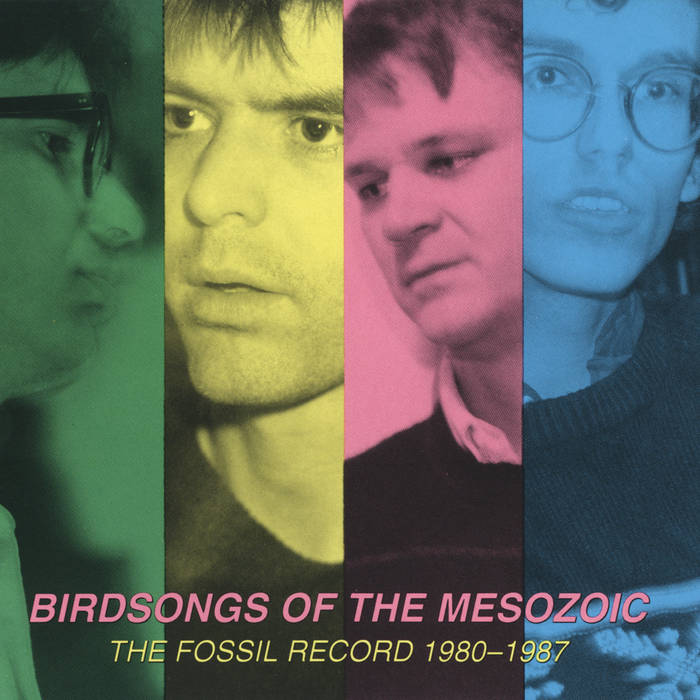 "The phoenix that rose from the ashes of Mission of Burma looked disconcertingly like...well, a pterodactyl. By the time Birdsongs of the Mesozoic's first EP was released, in 1983, Mission of Burma (of which Birdsongs keyboardist Roger Miller and guitarist Martin Swope were charter members, though on different instruments) had dissolved, and this band subsequently became a full-time gig.
The Fossil Record collects rare and unreleased studio recordings from a period beginning with the band's earliest days and ending with Miller's departure in 1988. The album opens with a 1980 version of "Sound Valentine" (which would be the lead track on the band's debut EP three years later) and bops between spiky, modal minimalist pieces ("Pulse Piece"), slabs of zen aggression ("Chen/The Arousing"), prehistoric tarantellas ("Lqabblil Insanya"), and unexpected cover versions (Brian Eno's "Sombre Reptiles").
Very few bands have ever managed to straddle the worlds of modern classical music and rock as successfully as this one did. This compilation makes a good introduction to [the band]."
– AllMusic

''Birdsongs Of The Mesozoic has found a common ground among garage band rock, classical, minimalism, UK progressive rock, and it's own favorite noises.''
– The New York Times

The Fossil Record is a collection of rare & unreleased studio recordings by the original lineup of Birdsongs of the Mesozoic. While you can hear the original studio recordings that the band released + mucho bonus material, on our double release "Dawn Of The Cycads", this is like an alternate history of the band from their beginnings until Roger left the band.

Birdsongs Of The Mesozoic has earned international recognition for their innovative sound. The New York Times called them "the world's hardest rocking chamber music quartet." Their unlikely mix of rock, punk, classical, minimalism, and free-form sound appeals to a broad range of musical tastes. Birdsongs' instrumentation is also quite extraordinary: piano, two synthesizers, guitar, and saxophone blend with electronic and acoustic percussion, creating an end result that is rich in texture and pleasing to the ear.

All music recorded at Sounds Interesting, Cambridge, MA. by Erik Lindgren
Mixed and produced by Birdsongs Of The Mesozoic