The Legend of Vernon McAlister 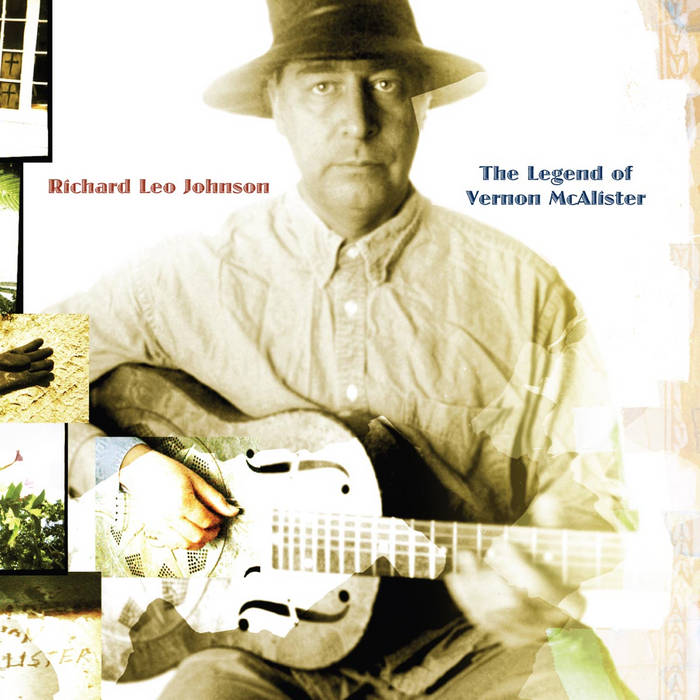 This album is very low key, very personal and very extraordinary. Best known for his blazing speed and unusual techniques on the acoustic guitar, "Richard Leo Johnson has emerged from the fringe of the Mississippi Delta to become one of the baddest axe slingers in the land." says Jazziz. On this album, Richard has traded in his trademark double-neck acoustic for a well-worn, 1930's National Duolian steel-bodied guitar which he stumbled across. "I pulled it out of the case and was immediately stunned by its playability and tone. Bells, horns, voices and other mysterious qualities emanated from its resonate chamber. Moments later I noticed something etched into the steel body. It was the name Vernon McAlister, apparently the one-time owner of this amazing instrument. Who was Vernon? I could find nothing about him. A myth of sorts emerged, using this wonderful instrument as the nucleus. Every sound on this recording comes directly from the Vernon guitar." Richard was inspired by this unique instrument and its sounds to try something different from any of his other albums. This is an album of deep beauty and innovation, created with just this one old guitar and some simple electronic and tape effects. As Dean Blackwood (Revenant Records) said about it, it is located in some sort of nether place between the old and the modern.

"A rustic strain of ambient Americana has been in the wind for the last year or so, with Daniel Lanois's solo pedal steel album, Belladonna, and Jeff Beal's literally haunted score to Carnavale taking American roots into ambient spaces. Richard Leo Johnson's The Legend of Vernon McAlister may have upped the ante. Johnson was already a critically acclaimed fret-burner, bringing two-handed tapping techniques to his double-necked acoustic. Here, he opts for a gentler, but possibly more avant-garde sound, trading his acoustic for a National Steel guitar. Like a Dobro on steroids, the National Steel is a metal guitar whose overtones and strange resonances make it capable of the most unearthly sounds. Creating a mythological narrative around the story of Vernon McAlister, whose name is actually etched on Johnson's ancient instrument, the guitarist creates a sound that is both mystical and rural, like the lost ghost of McAlister slipping his sound through static and haze. Johnson overdubs himself, picking and sliding notes and often using an e-bow that makes the instrument sound like a musical saw. The Legend of Vernon McAlister traverses the Appalachian fantasy of "Morning Glory," serene backwoods reveries on "Side Road to Splendor," and experimental tone poems on "Briar Patch Harmony." Richard Leo Johnson has created an album of hidden and subtle charms."
-John Diliberto/Amazon editorial review.

"A truly beautiful guitar record. This gentleman was given one of those metal acoustic guitars and fell in love with it. Ostensibly, this is a "country blues" CD - he starts off in the John Fahey realm, played very well and comfortably. But by the end his playing has become so evocative that you forget you're hearing acoustic guitars (he overdubs at times). He incorporates some "avant-garde" techniques as the album goes on, but they are worked so smoothly into the sequence that they are not important in and of themselves - it's more how they make the music feel. This disc is at times achingly beautiful, at times relaxedly comfortable, and at times mysterious and otherworldy. There was a type of music that guitarists tried to get at some years ago when they worked the John Fahey/ Leo Kotke realm, but they never quite got. This is actually it (to my ears.). And it was recorded in his attic."
-Roger Miller/Mission of Burma

"...an arsenal of unusual playing and production techniques...filled with strong melodies..."
-All About Jazz

"You can hear jazz, blues, folk and classical at times, but the lasting impression is how meaningful and heartfelt every note sounds; this is endless invention in the service of a private yet compelling beauty."
- JazzTimes