by Alec K. Redfearn and The Eyesores 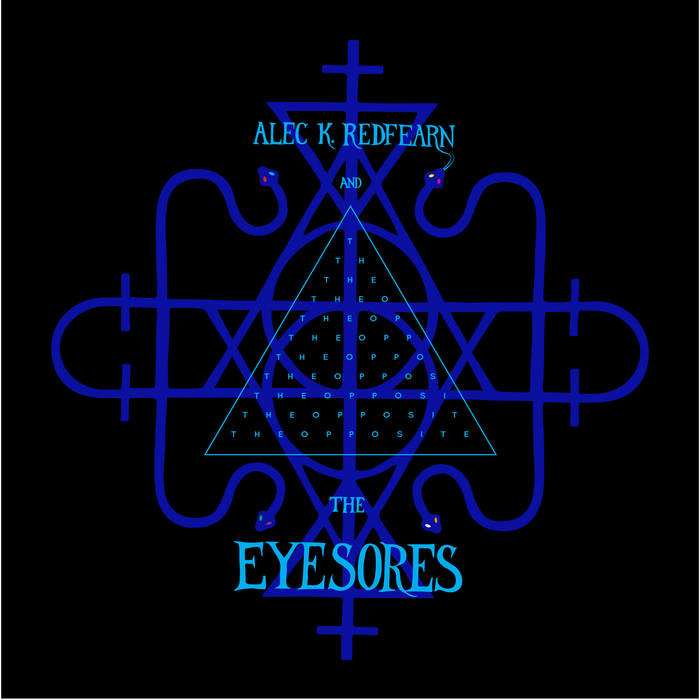 For the last two decades, the Providence, RI-based Redfearn has crafted a compelling, uncategorizable sound that is wholly his own but has tendrils that reach into a stunning variety of influences both musical and otherwise. The music is centered upon Redfearn’s arcane rock sensibilities, beguiling vocals and serpentine accordion lines, which lace the music with tinges of everything from Krautrock to minimalism, alternate-universe folk tunes to psychedelic prog. Thematically, his hallucinatory lyrics hint at mind-expanding concepts from his voracious reading and adventurous experiences, with seductive insinuations.

The Opposite is the Eyesores’ long-awaited follow-up to their wonderful 2012 release Sister Death. Where that album reached toward the epic with a roster of special guests and larger instrumentation, The Opposite pares things down to the core band, with an accompanying intimacy and intensity. The sparse instrumentation is extended with the use of pedals and amplification that blend with the acoustic instruments to offer a unique, alien palette from which to draw. A stream-of-consciousness approach gives the album’s lyrics a feeling of dreamlike imagery and elusive associations.

As has been the case for their last few releases, the album was recorded by Seth Manchester at Machines With Magnets. For the first time Alec worked with noted mastering engineer Udi Koomran at The Pergola. Both engineers helped to insure that the final release is sonically great. The personal and the universal, the poetic and the prosaic, esoteric explorations and the humorous insanities of daily life – all come together in the hypnotic and pulse-pounding songs of Alec K. Redfearn and the Eyesores. With The Opposite, the band has created a collection of music that is at once their most accessible and mind-expanding to date, the sort of mystery that rewards not solving but getting lost within.

Produced by Seth Manchester and Alec K. Redfearn | Recorded and

Mixed by Seth Manchester at Machines With Magnets | Pawtucket, RI

Mastered by Udi Koomran at The Pergola | Tel Aviv, Israel

Cover by Alec K. Redfearn and Kathleen Mahoney-Cobb | Layout and

Thanks to Steve Feigenbaum, Cyril Moya, Rose Bannister, Joyce Feigenbaum, Javier Diaz, Machines With Magnets, all Eyesores, past and present, and to Providence, Rhode Island.