The People In Your Neighbourhood 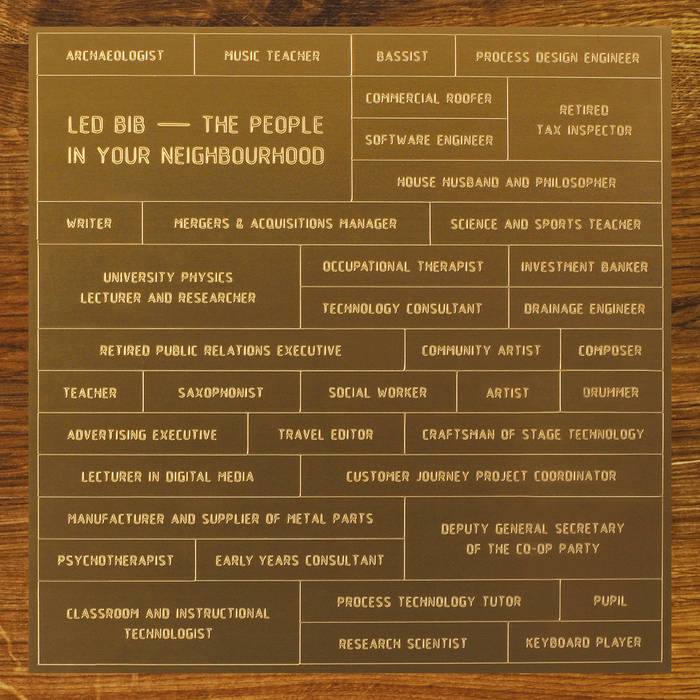 Nick Bradey superb band from London , playing an amazing style of music incorporating jazz and prog influences . check this out!

Led Bib retains its original line-up of 10 years ago, when the infamous five met at Middlesex University and formed the band for Mark Holub’s university project. The group are bandleader Mark Holub, drums; Pete Grogan, saxophone; Chris Williams, saxophone; Liran Donin, double bass and Toby McLaren keyboards/ piano. Looking back on a decade of music that takes in seven albums, hundreds of live shows and a string of accolades, Led Bib can feel content that they have punched through genre barriers to fly the flag for progressive music in the UK and that they forged a path where a host of new exciting bands would follow.

Musically, the album is a coming of age of sorts – the pounding grooves are still very much in evidence, but there are more introspective moments too, showing a maturity that only ten years on the road can achieve. The album was recorded under the watchful eye of Grammy winning engineer Richard Woodcraft (Radiohead, Neil Young), with the band using monitors only (no headphones) and the result is more akin to a powerful live show than a studio album, and is perhaps the reason it has such a cinematic sound.

The album’s title 'The People in Your Neighbourhood' is taken from Holub’s fondness for the Sesame Street sketches of the same name. The concept brought about a curious insight into Led Bib’s fans too, when the band asked ‘pledgers’ to their Kickstarter campaign (the crowd funding campaign which raised funds to make the album) what their occupations were. A fascinating array of jobs ensued and feature in the album’s artwork - from psychotherapist and roofer to philosopher and ad. executive, plus of course fellow musicians and artists.

All tracks by Mark Holub except tracks 1 & 7 by Chris Williams, tracks 3 & 11 by Liran Donin and track 4 by Pete Grogan.