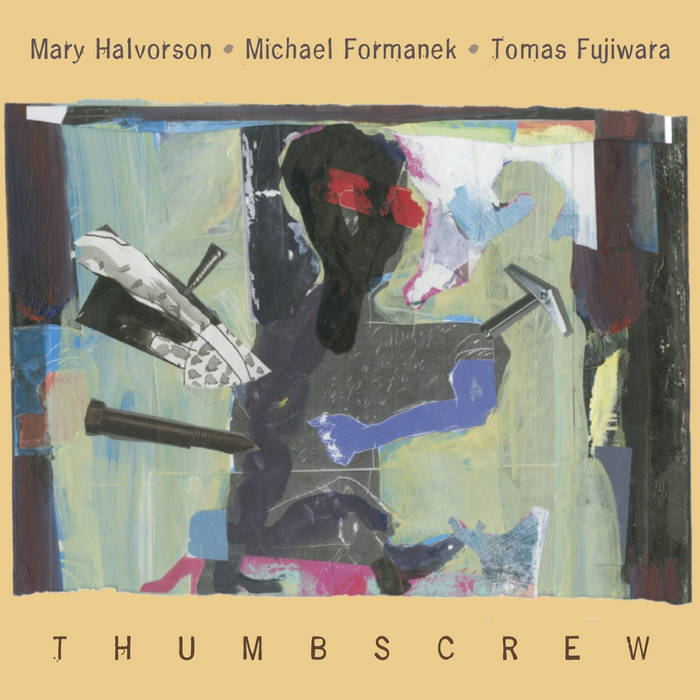 Seb Rolley The way that the trio flow between improvisation and composition in this album is incredible. Halvorson is such a unique voice among jazz musicians, one of the best playing! Favorite track: Cheap Knock Off.

Carl Baugher This album demonstrates the creative viability of a trio closely attuned to each other's strengths and talents. The compositions are varied and the improvisations are strong and inventive. The music sounds grounded yet fresh and surprising. Excellent.

Lawrence Stanley & Hope Carr I long thought of Mary Halvorson as an 'anti-guitarist' (which is not an insult by any means) with her de-tunings and spiky single note 'runs.' Until this album. In this power trio with Michael Formanek and Tomas Fujiwara, her playing sounds more muscular and flowing, perhaps due to the tightness of the compositions...

"...the bonds are already strong."
– DownBeat

Thumbscrew, a band consisting of three well-established leaders on the new jazz/new music scene, make inviting music full of wonder and discovery. With their eponymous debut album, they document the group's commitment to new music created specifically for this ensemble.

While Michael Formanek (double bass), Tomas Fujiwara (drums) and Mary Halvorson (guitar) are all known for their prodigious capabilities as improvisers, Thumbscrew is more of a composer’s vehicle. While many cooperative bands draw on material recycled from other projects, "One of the things we said at the beginning is let’s just write music for Thumbscrew and it will only be Thumbscrew music," says Formanek. "It really is a three-composer trio, and all of our tunes have our basic aesthetics attached. But we want everybody to have input. Nobody’s afraid to make a decision. It’s one of the first co-ops I’ve been in where everyone’s really willing to take control at any given moment."

With each musician contributing three tunes, the album encompasses an array of textures and strategies, while maintaining a consistently open and transparent sound. Generating tremendous intensity without necessarily increasingly volume or density, Thumbscrew buzzes and crackles, burns and croons. The group is both open and composerly. Part of what makes the band’s music so engaging is that they draw widely and deeply from any number of sonic sources.

They first worked with Formanek when he subbed in Bynum’s band in 2011, and the chemistry between the three was so readily apparent they immediately started looking into performance opportunities as a trio. This fine, distinctive effort is the result of 2 years of planning, rehearsing and gigging.

Recorded on April 7, 2013 at The Bunker, Brooklyn, NY.
Recorded and mixed by Jon Rosenberg.
Produced by Thumbscrew.