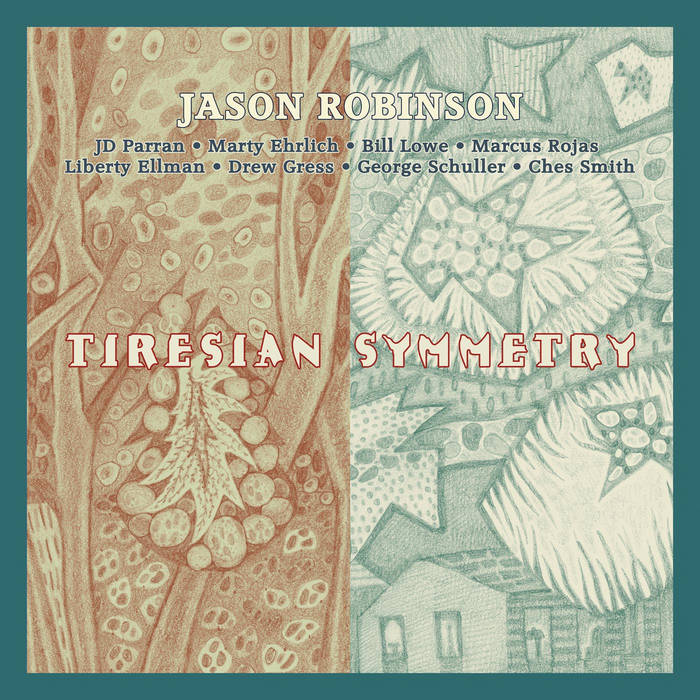 If you would like to purchase the physical copy of this album or check out more of this artist's music, please go here:
www.cuneiformrecords.com/bandshtml/robinson.html

"The ensemble that Robinson assembled for the session is composed of several of modern jazz's most individualistic players...Robinson's compositions manage to draw a straight line through bop, Duke Ellington, Ornette Coleman and Eric Dolphy straight into the modern day with acute-angle swing, blues-bluster and memorable themes that seem to scratch at the back of the mind with familiarity without resorting to quotation or imitation....Robinson's pieces straddle the timeline in a way that sets each musician off on his own exploratory path." – Downbeat

On saxophonist/composer Jason Robinson’s polydirectional masterpiece Tiresian Symmetry, he’s gathered an extraordinary cast of improvisers to investigate and embellish the framework of his compositions. The music’s richly suggestive harmonic and metrical relationships elicit a wide array of responses, but ultimately listeners find their own sense of order and meaning amidst the sumptuous sounds. For Robinson, a capaciously inventive artist who has flourished in a boggling array of settings, from solo excursions with electronics and free jazz quartets to roots reggae ensembles and multimedia collectives, Tiresian Symmetry represents his most expansive and exciting project yet.

"I was attracted to the myth of the soothsayer, who tells the future even when it’s not welcome information," Robinson says. “But on a more technical level I was intrigued by the numerical relationships. Tiresias lived seven generations and spent time as both male and female, which gives you 7/2. The pieces I wrote for the album embody those numerical relationships in a variety of forms. Of course, in the end there’s the litmus test. The music has to sound good and feel good."

The nine-piece band features some of the most inventive and vivid players in jazz today:

Many thanks to: JD, Marty, Marcus, Bill, Liberty, Drew, George, and Ches for their
dedication to the project and for being their own necessary and creative selves; Steve, Joyce, Javier, Simon, Bill, and Mark at Cuneiform Records for their support and faith in the project; and Ian Stahl, James Ilgenfritz, Jacob Cooper, Bruce Diehl, and Nancy Marciano for important technical assistance. My deepest thanks go to my partner Stephanie Robinson, whose moral support, musical ear, technical know-how, and clever, efficient producing were absolutely crucial to the project. I must also give a big thanks to Henry Threadgill, whose visionary recordings of the 1990s (with two tubas) continue to be a major inspiration to me.

This project was supported by the H. Axel Schupf Fund for Intellectual Life at Amherst College.