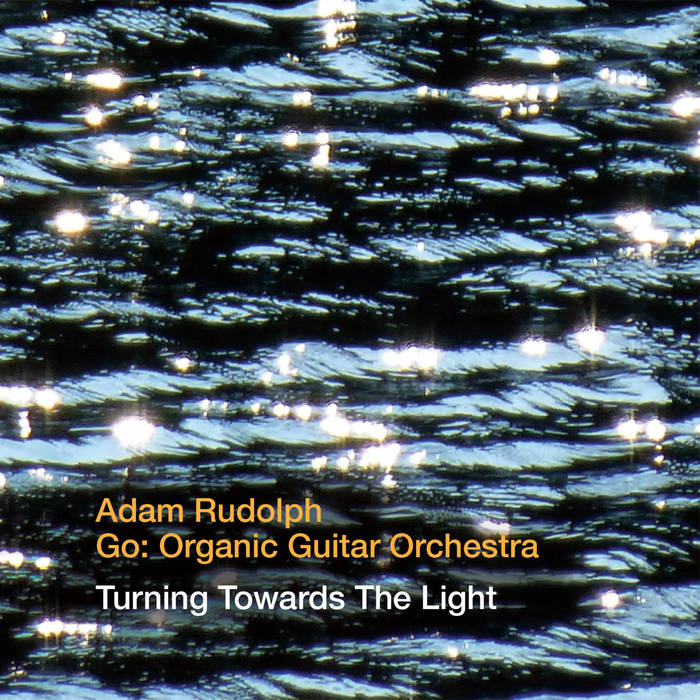 On the Winter Solstice of 2014 – the Northern Hemisphere’s longest night of the year – composer, bandleader & percussionist Adam Rudolph convened 11 of New York City’s finest and most adventurous guitarists in a New Jersey studio for a most auspicious event: the debut of Go: Organic Guitar Orchestra, his all-guitar orchestra. In attendance were guitarists Rez Abbasi, Nels Cline, Liberty Ellman, David Gilmore, Miles Okazaki, and Marvin Sewell, all on electric guitars and effects; Damon Banks on bass guitar; Marco Capelli on acoustic guitar, effects; Jerome Harris on electric guitar, electric bass guitar, and lap steel guitar; Joel Harrison on electric guitar and national steel guitar; and Kenny Wessel on electric guitar and banjo. With Rudolph at the helm, conducting musical charts and creative improvisational energy, the orchestra began to play. The result is this extraordinary release, Turning Towards the Light.

Rudolph grew up and began playing music on the South Side of Chicago, performing with artists like Fred Anderson. By 1978 he was touring Europe with Don Cherry. Hailed by the New York Times as “a pioneer in world music”, in 1977 Rudolph began his collaborations with kora player Foday Musa Suso, followed by his work with the Gnawa musician Hassan Hakmoun, L. Shankar and other musicians from around the globe. His longest and most significant collaboration was with the great Yusef Lateef; from 1988 until Yusef’s death in 2013 they performed as a duet and collaborated as composers on many large ensemble projects. He has also taken influences from contemporary composers such as Pierre Schafer, Olivier Messian, Bela Bartok & Toru Takemitsu.

Rudolph has integrated and transformed all of these influences into a highly personalized language, a language whose rhythmic component, which he calls “Cyclic Verticalism,” combines polyrhythms (from African music) and rhythm cycles (from Indian music).

Turning Towards the Light is the 10th release in Rudolph’s series of recordings for Go: Organic Orchestra. His previous recordings for Go: Organic Orchestra featured an array of instrumentation to bring to life his rhythmically unique creative music. But for Turning Towards the Light, Rudolph envisioned a new kind of orchestral sound conveyed by a single instrument: guitars, whose strings, coaxed by the right hands, are capable of unleashing an orchestra of different musical sounds. He says: “I try to do something new with each performance and recording. This time I wanted to experiment with a new kind of orchestration. I felt that with their range of sound and rhythm, these 11 electric guitars could generate a sonic palate that had never been heard before. I was looking for a new kind of “Future Orchestra” – and I think we found it.”