Upon Both Your Houses 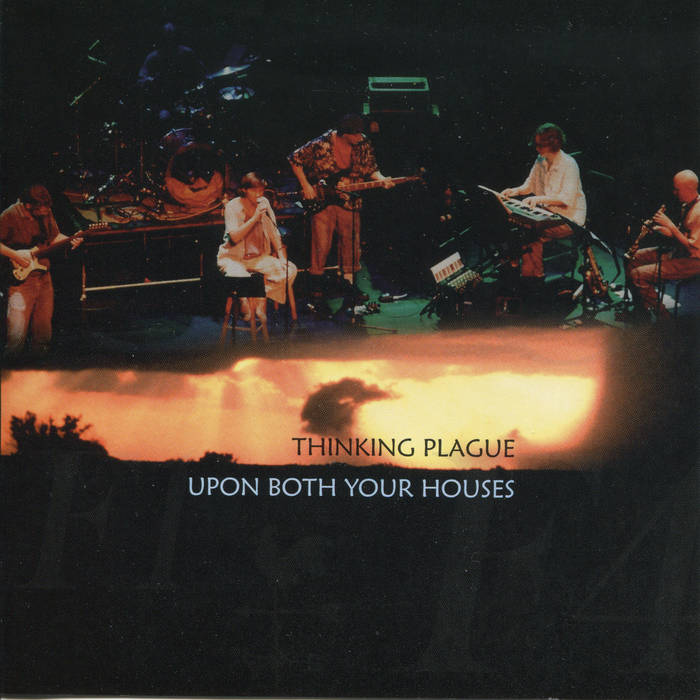 scubageek It's a great live document, of a performance I actually saw. I actually don't remember much from the actual performance, apart from the bits where Dave Kerman played drums using Barbie dolls and wire whisks in place of his drumsticks, but this really reminds me how great this performance. Particularly love Mike Johnson's guitar work here. For fans of Henry Cow and other so called "RIO" styled avant/progressive rock.

mahaaaham thanks to release it again!!!

In 1999 and 2000, for the first time, Thinking Plague hit the road, playing clubs and festivals outside of the Denver area. Their final show was professionally recorded at NEARfest 2000 and this is that show.
The band were a dynamo, fusing great subtlety to emotionally devastating and powerful musical material. It includes a large number of pieces from their release In Extremis, as well as tracks from In This Life (the stunning Love being a particular highlight for me), The Early Plague Years and even a track by Hamster Theatre (three members of Thinking Plague also are in Hamster Theatre).
The original multi-track tapes were mixed and mastered by Bob Drake and this is about as definitive a modern-day live Thinking Plague experience as there can be! Recommended!

"This is a live set from Nearfest in June 2000, where Thinking Plague played an intimate set for an appreciative audience. Due to the complexity of their material these live renditions naturally end up sounding a bit different from their studio versions - but different enough to be worth a listen in their own way.
Naturally, the band's then-latest studio release In Extremis is heavily represented, and there's also three songs from In This Life and two songs (well, one song and some extracts) from Moonsongs, so a reasonable spread of the group's career is represented; plus you have some on-the-spot improvisations in the form of Hamster Dance and a piano solo.
The setlist is carefully chosen and delivered in such a way to provide a varied experience which flows quite well, with even songs from very different stages of the group's development fitting together naturally. The recording quality is also excellent, making this a worthwhile pick for any RIO fan." – progarchives

This album was originally released in 2004 on NEARFest Records.

"The songs are in the order performed at the concert. Due to time constraints and pacing I shortened the gaps between songs, cut a few repeats of the final chord of Matt's piano solo (track 8) and repaired an unintentional pause in 'Warheards'. There are no overdubs. Mixed and mastered for wide dynamic range; no attempt to compete in the 'loudest CD in the changer' contest.
Turn the volume back up a notch and enjoy." – Bob Drake