We Are All Small Pixels 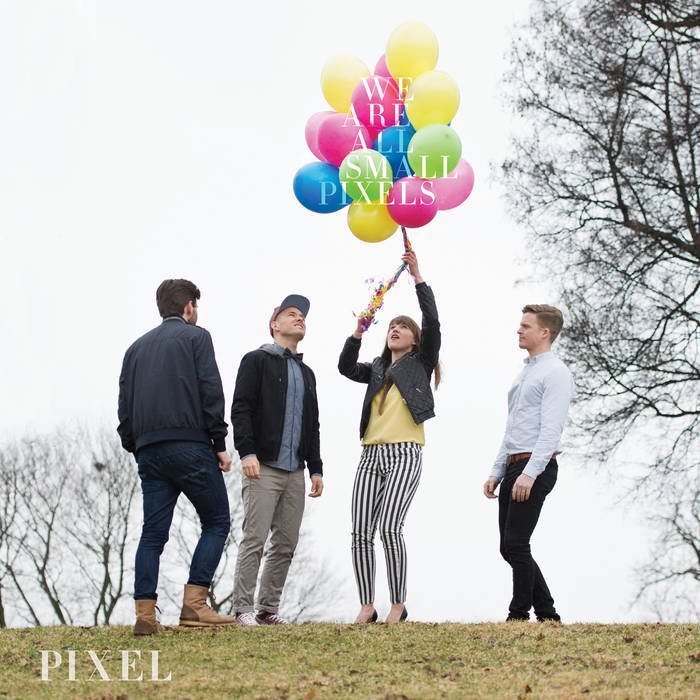 Deidre House The second album from Pixel, this continues in a jazz-pop fusion mode similar to their first, though I think the more prominent lyrical aspect makes this one a bit more accessible overall. Not many bands can make music as happy/accessible sounding as this and remain so interesting and unique. Favorite track: Space.

tOm Great album, as the other.

We Are All Small Pixels – yes, that describes us all in this post-atomic digital age – but some bands pack a big sonic wallop. In the case of Norway’s prodigious indie jazz combo Pixel, the little elements cohere into a singularly arresting sound, combining the improvisational imperative and acoustic instrumentation of a free bop quartet with the impassioned vocals and incisive lyrics of indie rock.

Following up on its acclaimed 2012 debut Reminder (Cuneiform), which established the quartet as a bold new voice on the international jazz scene, the young Oslo-based band delivers a stellar second album that makes a mighty big musical statement. Led by double bassist, vocalist, and songwriter Ellen Andrea Wang, the combo further refines its fervently creative vision with We Are All Small Pixels, a genre-smashing manifesto that translates ancient spiritual insight into the digital age.

For Wang, the fundamental building block of billions of photos and graphics that are the communications currency of her insistently connected generation represents “being a small but important part of the big picture. Whether human beings in the universe, or a simple chord in a big symphony, every pixel is unique and important.” In Pixel’s music, every perfectly placed note and wantonly propulsive beat paints a vivid 21st century picture, a seductive sound that embraces jazz’s harmonic sophistication, minimalism’s incantatory power, rock’s primal thrust, and pop’s lyrical concision.

Featuring Wang on bass and lead vocals, drummer Jon Audun Baar, trumpeter Jonas Kilmork Vemøy and saxophonist Harald Lassen (with everyone contributing backup vocals), Pixels features the instrumentation inextricably linked to Ornette Coleman’s epochal “free jazz” quartet of the late 1950s and early ‘60s. The band takes advantage of the harmonic space created by the absence of a chordal instrument, but Pixel favors tightly orchestrated tunes and intricately constructed arrangements. Which isn’t to say that quartet is in any way predictable. With sudden metrical shifts, starkly contrasting textures and Wang’s vocals delivered in unison with the horns, the resulting sound is transfixing and unlike anything else on the scene.

The album opens with the inviting, almost calypsonian bounce of “Be Mine,” a surging tune showcasing Wang’s crystalline vocals and a melody so brightly enticing it could easily find a home on an adventurous rock radio station. She follows that forthright lover’s plea with the jagged “Space,” an equally emphatic call for solitude, revealing in song the delicious push-me pull-me tensions, the contrasting and contradictory forces that animate so much of Pixel’s music.

Part of what makes Pixel’s music so effective is that even when a tune is dissonant or abrasive it never wears out its welcome, with the majority of the album’s 11 tracks clocking in under four minutes. The album’s centerpiece and longest track is the instrumental “Night Dreamer,” an episodic journey that moves from the pummeling opening section to Vemøy’s beatific trumpet to a triumphant closing fanfare powered by more muscular Baar drum work. As if emerging from unquiet slumbers, the following piece “Easter Song” is the album’s shortest track, at barely over a minute, with a luminous wordless vocal that emerges from an undulating tenor sax line generated by Lassen’s circular breathing.

With an insistently buzzy tenor line setting up Wang’s ethereal vocals, “Dreaming” is a gorgeous song defined by its contrasting textures. Wang turns fierce and feisty on “Daylight,” with the horns emphasizing her need and urgency. The album closes with the mysterious “Time,” a strikingly lovely song with a gently lamenting vocal refrain. Whether she’s wailing, belting or murmuring, Wang is an uncommonly expressive singer who knows how to mix it up with the horns.

On a scene rife with exceptional young female players, Wang stands out as a particularly accomplished artist. As a composer, player, and perhaps most importantly as a bandleader who has melded like-minded players into a capaciously inventive ensemble, she stands at the forefront of a rising generation that’s remaking jazz in their own image. Her notoriety is quickly spreading via captivating performances and appreciative critics, resulting in a stream of impressive awards in Norway and on the international stage. In October 2012, the magazine Japan Jazz named Wang their “New Star of the Month”. The 2012 Oslo Jazz Festival presented her with that year’s prestigious and lucrative Statkraft Young Star award, and the next year, she won the 2013 TONO prize, category «Årets Utfordrer» [Innovator], for the song “Call Me” from her Reminder debut album.

Now 26, Ellen Andrea Wang founded Pixel in early 2010, which proved to be her breakout year. Featured on the album Norwegian Song 3, the project showcased her bass prowess in the company of storied Nordic masters such as Dag Arnesen, Pål Thowsen, and Palle Mikkelborg. Mentored by bassist Bjørn Kjellemyr at the Norwegian Academy of Music in Oslo, Wang has been in wide demand among her peers, appearing on more than a dozen albums with top-flight artists including Jon Balke, Jan Gunnar Hoff, Jon Eberson Group and Ketil Bjørnstad.

Before he took up the saxophone at 13, Harald Lassen studied the piano and sang gospel in church. A respected bandleader in his own right since 2008, he’s collaborated with American heavyweights like Andrew D’Angelo and Ralph Alessi. But Lassen, 26, has recently cemented his status as an essential new voice through his work with his own band Play Tell, which features internationally renowned bassist Mats Eilertsen and legendary drummer Jon Christensen (who powered Keith Jarrett’s great 1970s European quartet). Last year he received the prestigious JazzIntro Award and was named the Young Jazz Musician of the Year with his quintet Mopti (which recently released a debut album on Jazzland Recordings). Beside Mopti and Pixel, Lassen appears on four other albums released in 2013, including sessions by Duplex, and Dr. Kay And His Inter Steller Tone Scientists.

Jonas Kilmork Vemøy, 27, graduated from the Norwegian Academy of Music in 2011. One of the most expressive trumpeters on the Scandinavian scene, he’s been sought out by a wide array of acts, including prog rock band Blokk 5, the Balkan brass-inflected The Captain and Me, and the pop/rock band Lama, created by former Jaga Jazzist keyboardist Nils Martin Larsen. In addition to Pixel’s second album, he plays on new albums by pop artist and songwriter Kristin Minde, and jazz pianist Jens Andreas Kleiven.

Like Vemøy, Jon Audun Baar, 26, is a conservatory-trained musician who studied at the Norwegian Academy of Music with teachers like Jon Christensen and Rune Martinsen. A prolific sideman, he’s performed at major festivals with numerous bands and artists over the past four years. Outside of Pixel, Baar has been most visible in an acclaimed trio with the well-traveled guitar master Jon Eberson, a pillar of the Scandinavian jazz scene since the early 1970s.

Together in Pixel, these 4 talented musicians form one of the fastest rising and most innovative ensembles in Scandinavia’s flourishing jazz scene. Performing at Scandinavia’s jazz festivals and clubs before ever-increasing numbers of fans, recording albums that garner international critical acclaim, winning numerous awards, the young Pixels are poised to take the international jazz stage by storm.