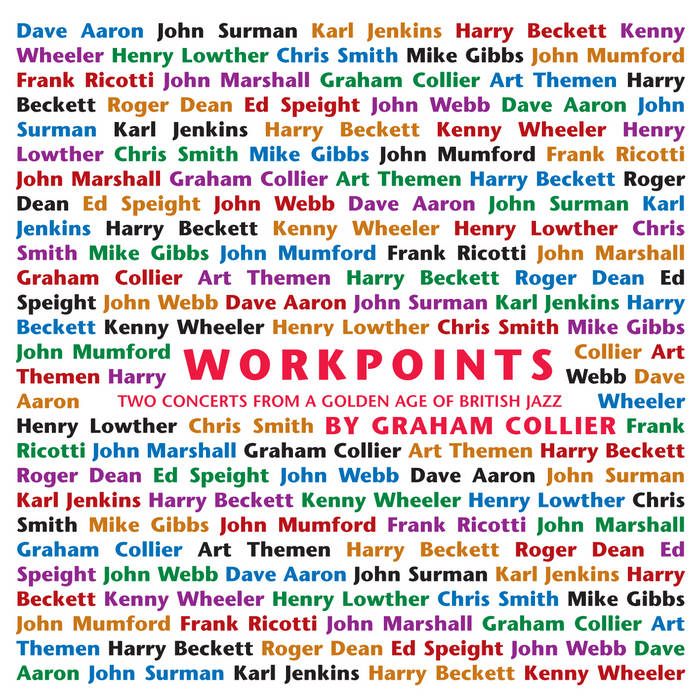 Called "A pioneer...a true British jazz original." by The Times, "An inventive and underrated jazz figure" by Jazziz and "Britain's most original jazz talent." by The Financial Times, Graham Collier was one of the best known British jazz composers, and over a 40 year career, his list of compositions and commissions grew to encompass ensembles around the world.

He was well known as an author and educator, having written seven books on jazz. He was born in Tynemouth, England in 1937. He won a Downbeat scholarship to Berklee School of Music, Boston, studying with Herb Pomeroy and becoming its first British graduate in 1963.

Returning to Britain, he formed the first of many line-ups known as Graham Collier Music, which over the years has featured almost every British jazz musician of note.

Workpoints consists of two previously unreleased concerts from 'a golden age of British jazz': one from 1968 and one from 1975. The music is composed with lots of room for contributions from the individual players, and in that regard, might be comparable to the work of one of Graham's heroes, Charles Mingus.

"[Workpoints]...may well prompt a serious reassessment of this important British artist, out of whom much of the most inventive latter-day British jazz ...has emerged.”
– Penguin Guide To Jazz

Two valuable if obscure dates led by British bassist-composer Graham Collier are issued for the first time on this double CD...The music is adventurous and swinging in its own fashion, but also influenced by the avant-garde and looking towards the even freer British jazz of the 1970s." – AllMusic